How to grow–and love–Himalayan blue poppies: Your complete guide (Column #1359) 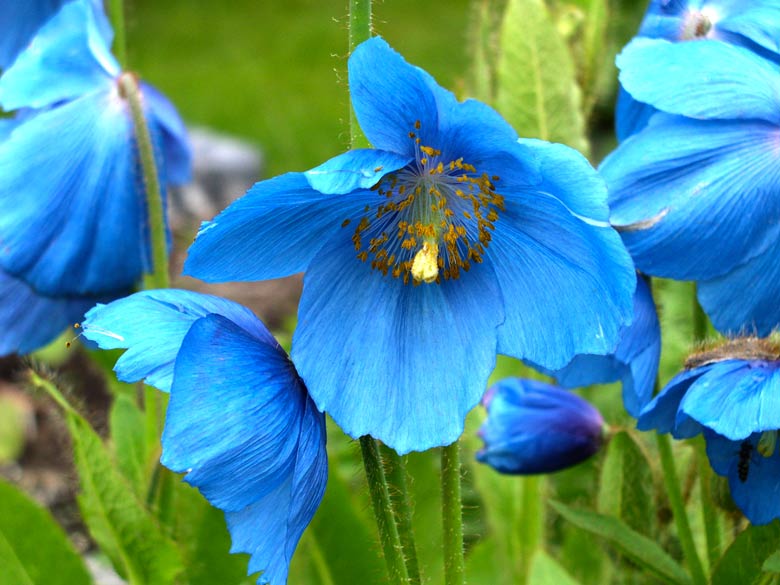 Some say it’s one of the holy grails of the botanical world. But in our world, in Kodiak, Alaska, Himalayan blue poppies simply love to make a scene, especially for photographers.

When taking pictures, there’s a time when a subject becomes so familiar, so common that it’s regarded as a “mature subject.”

For example, to Kodiak residents, a mature subject might be an eagle, a bear, and a spruce tree. For someone in Florida, it might be flamingos, alligators, and palm trees.

“Oh my God! Look at those poppies!”

Each summer, I host photo workshops for guests traveling to Kodiak Island with Natural Habitat Adventures, the nature-travel company out of Boulder, Colorado.

They spend a couple of days in Kodiak before hopping on a floatplane to Katmai National Park and Preserve. There, they hang out on the tide flats and grassy meadows with the park’s most famous resident: The coastal brown bear. 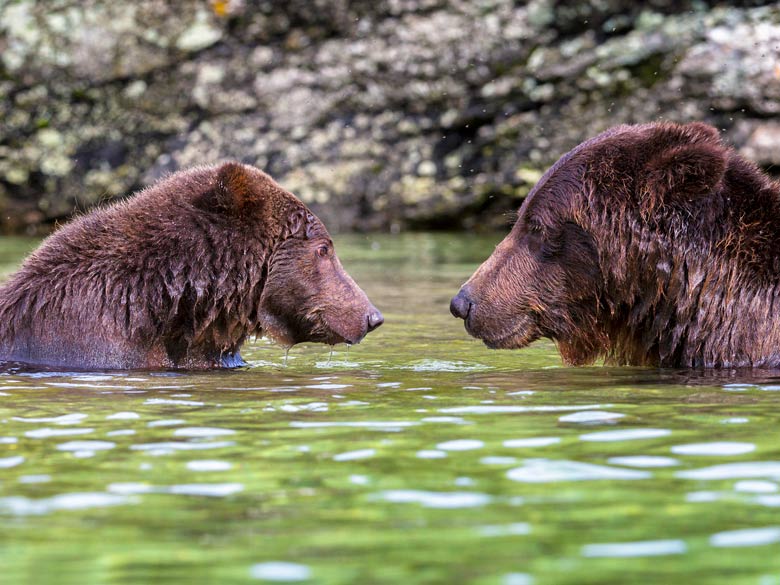 On the morning of their flight, they stop by our oceanfront home and B&B to learn how to shoot bears (with a camera!) and how to behave around them.

Rule #1: Never run from a bear

Between you and me, it’s more like a pep talk.

One morning, a group of camera buffs from Poland, British Columbia, and Wisconsin arrived at the house. After sharing my PowerPoint slides (sprinkled with tips about how to behave around bears, foxes, and the occasional wolf), everyone spilled out to the garden, cameras in tow. 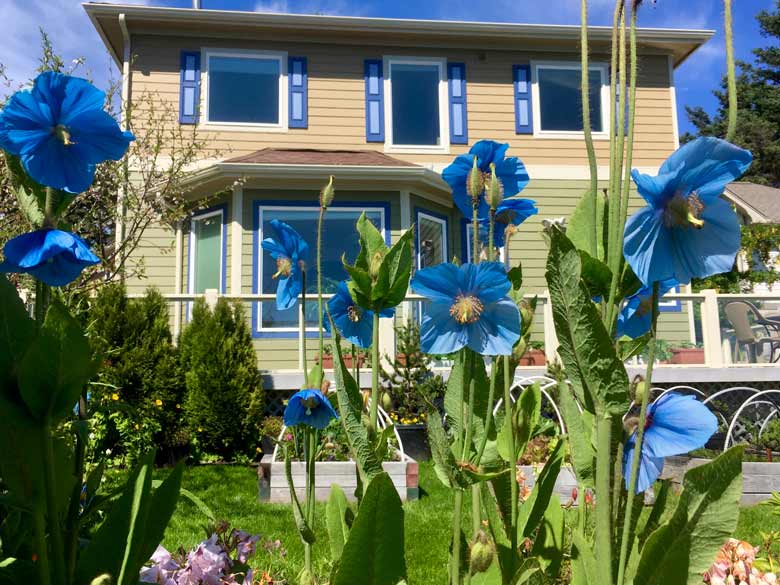 It took only a few minutes for the photographers to beeline over to the raised beds facing the ocean. There, regal stands of Himalayan blue poppies bloomed atop 4-foot tall, fuzzy stems.

Camera shutters clicked and smartphones recorded movies of them waving, ever so slightly, in the breeze.

Blue poppies, to most people, are not mature subjects.

Many gardeners would give their left green thumb to “have the blues” in their garden. The delicate, bowl-shaped flowers with lemon yellow centers draw people and pollinators alike.

So if you live in Minnesota and suffer from poppy envy, you’re not alone. Even gardeners in Washington State struggle with this perennial ever since the Pacific Northwest region of the U.S. began shifting to a warmer, drier Mediterranean climate some 35 years ago.

Once considered a myth, blue poppies, are native to the high elevations of the Himalayan Mountains.

These spectacular flowers are members of the genus Meconopsis (MEK-uh-NOP-sis) in the family Papaveraceae, though the jury’s still out about how they are classified.

Confused? Me, too. But I’m not going to lose sleep over it…

Blue poppies were first described by French botanist Viguier in 1814 who named it as “poppy-like” (Greek ‘mekon’ for poppy, and ‘opsis’ for alike).

Below is a photo of embroidery stitches that I added to embellish a photograph of blue poppies printed on canvas. 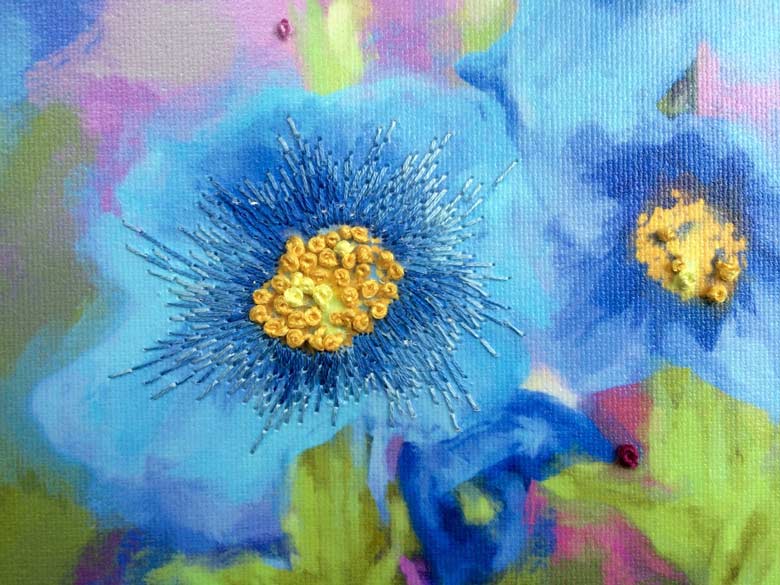 Bottom line: Blue poppies are easy to grow, provided they’re given the right type of environment.

They need fertile, moist, and well-drained soil. I turn homemade compost in the soil about every other year. They grow so well that I need to divide the clumps every three years or so.

In cool climates, blue poppies thrive in full sun to filtered light. They do not like heat, so high temperatures are a problem for anyone dreaming of growing this heavenly flower. I cringe when I see blue poppy seeds listed in seed catalogs that have no business doing so. Buyer beware!

Want to grow Himalayan blue poppies? You need to live where summers are cool.

Blue poppies prefer to be kept consistently moist, especially while actively leafing out, growing, and blooming. In the winter, many sources say they like to be kept dry, but I would argue that too dry is detrimental.

Even in our temperate rainforest conditions, we’ll experience dry spells during the summer. And yes, I water our Himalayan blue poppies.

By the way, here’s a little video I made about blue poppies… and how they taught me one of my best life lessons. You can watch it here or click on the image below… 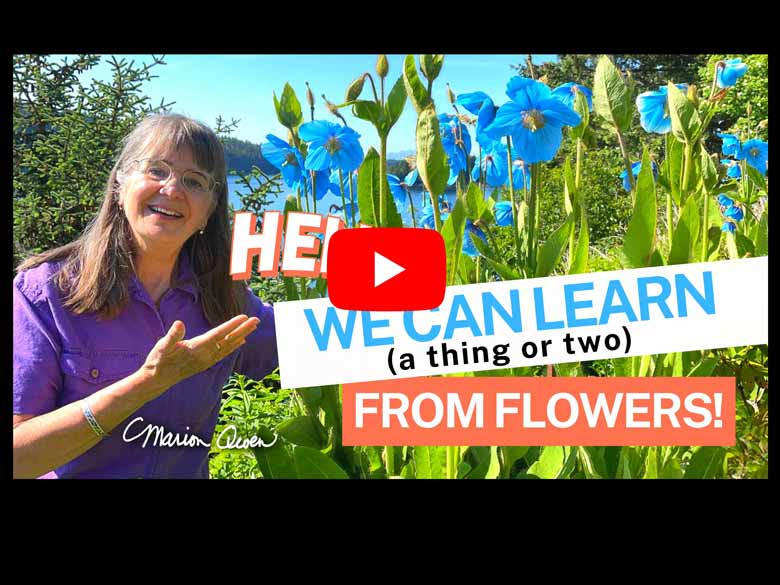 Stick with cool climates. You’re doing blue poppies a disservice by trying to grow them where it’s hot and humid. Period.

Whether you grow Himalayan blue poppies from seed or you are gifted a clump from a “mother” plant, I recommend removing any buds that appear on stems during their first year in your care.

That way, your blue poppies will be able to direct more energy into establishing strong roots and developing foliage.

TIP: Cutting the stalks or stalks-plus-foliage down to the ground in late fall is also a common practice. though I usually let them die back on their own. If collecting seeds, harvest the pods after they’ve turned brown but before they open and scatter the seeds.

Though slugs are free-ranging here in Kodiak, Alaska, I’ve never seen them take on a blue poppy. If have seen, however, issues with crown rot (planted too deep) and stems snapped off from gale-force winds.

Speaking of wind, blue poppies do not need support stakes or hoops. Remember, they originate in the cool, Himalayan mountains.

How to propagate blue poppy plants

Every year, Kodiak gardeners get together and host a spring plant sale to support KMXT, our public radio station.

When clumps become overcrowded, simply divide them as you would a bunch of rhubarb: Force a shovel right down the middle of the clump.

MYTH: Many sources caution that dividing your plant to create a new clump elsewhere in your garden, might kill the plant. This is not true if your soil is rich in organics such as compost and your climate is favorable (cool).

How to grow Himalayan blue poppies from seed

Growing blue poppies from seed is not as tricky as commonly thought. Fear not…

Here’s how I grow poppies from seed:

Then we have Meconopsis cambric, also known as the Welsh poppy, which is indigenous to England, Wales, Ireland, and the fringes of Western Europe. 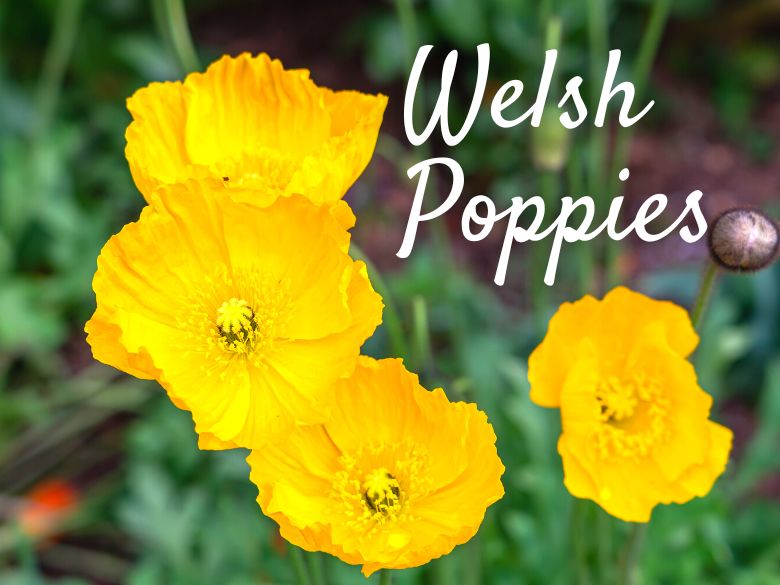 Welsh poppies bloom in abundance around Kodiak as clumps of copious yellow flowers that bloom most of the summer and are an important food source for bumblebees. They’re a homeless flower though, as recent studies suggest that Welsh poppies do not belong in the Meconopsis genus.

Meet the national flower of Bhutan

Then there’s Meconopsis grandis, the blue poppy, which is the national flower of Bhutan. M. grandishas been the topic of many stories, including “Blue Heaven,” a gardening memoir written by horticulturalist Bill Terry.

From Mount Everest to the West

It’s believed that in the spring of 1922, a British Himalayan expedition, led by legendary mountaineer George Mallory, discovered the Himalayan blue poppy on their failed attempt to reach the summit of the then-unconquered Mount Everest.

Four years later, in 1926,the flowers were introduced to much excitement at the Royal Horticultural Society’s spring garden show,

Sigh. The fan-fare was short-lived though, mostly because gardeners found them difficult to grow.

And so, the species became fabled over the decades, hence the myth.

While Himalayan blue poppies carry the reputation for being fussy, the yellow Welsh Poppy (see photo above) is often judged as a weed, though a nice-looking one, due to its vigorous self-seeding.

Blue poppies, by the way, do not produce opium as do their cousins in the Papaver family. That distinction belongs to Papaver somniferum, the opium poppy, as the species from which opium and poppy seeds are derived.

Opium is the source of many drugs, including morphine, heroin, codeine, and so on. The Latin botanical name means the “sleep-bringing poppy.”

Needless to say, the opium poppy, which is grown as an annual, is the only species of Papaveraceae that is an agricultural crop grown on a large scale.

Poppy seeds are an important food item and my favorite cultivar, ‘Przemko’ is an excellent source of poppy seeds for muffins and thrives in cool growing conditions.

Meconopsis poppies are available in shades of blue, red, orange, purple, white, and yellow depending on species and cultivar.

Here is a photo, taken of alba, or white meconopsis poppies in our garden. They look like sunny-side-up eggs. Many gardeners consider this variety even more special than their blue cousins.

What do you think? 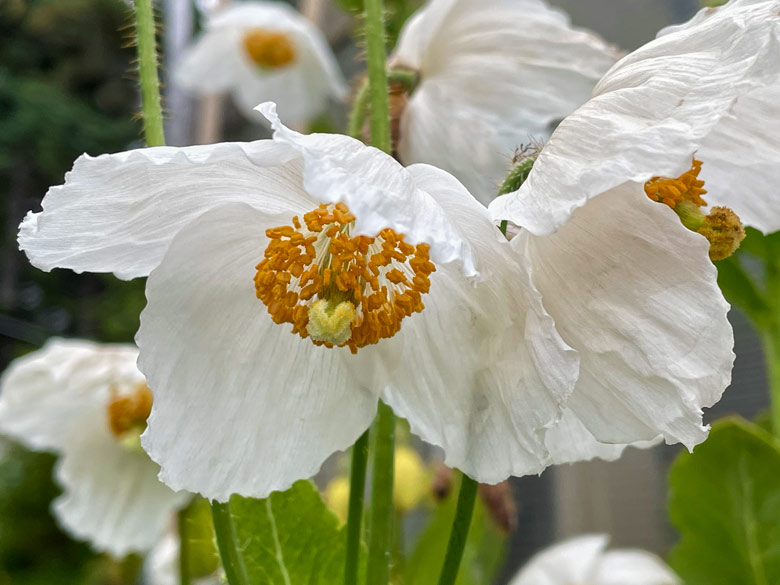 In case you were wondering, the seeds themselves contain minuscule amounts of opiates, and have no measurable narcotic effect in small quantities.

Many gardeners cultivate P. somniferum in Kodiak. And for years, the seed catalog company, Thompson & Morgan, based out of the U.K., carried many varieties of poppies.

Then one year, all the poppies were gone from the catalog…

When I talked with a customer service rep, they simply said it was “too risky” to carry the seeds.

Technically speaking, it is illegal to grow opium poppies, in the United States as well as in Austria, Switzerland, and the United Arab Emirates where possession of poppy seeds is also illegal.

Imagined being imprisoned for possessing poppy seeds obtained from a bread roll.

Opium is listed as a Schedule II controlled substance by the Drug Enforcement Administration, though it’s rarely enforced for poppies grown or sold for ornamental purposes. The stem and seed pod (the principal source of latex used to create opiates) are popular additions to dried flower arrangements.

Though the opium poppy is legal for culinary or esthetic reasons, poppies were once grown as a cash crop by farmers in California.

Thus the law of poppy cultivation in the United States is somewhat ambiguous because The Opium Poppy Control Act of 1942 (now repealed), stated that any opium poppy should be declared illegal, even if growers were issued a state permit.

And finally, the Poppy Rebellion

This led to the Poppy Rebellion, a time when the Narcotics Bureau arrested anyone planting opium poppies and forced the destruction of poppy fields. Today, this area of law has remained vague and somewhat controversial in the United States.

Meanwhile, last I checked, you can’t get arrested for possessing poppy photos.

I hope this article makes Himalayan blue poppies a more mature subject for you. Let me know if you have any questions.

And if you want to see a brown bear, come to Kodiak!

Have a terrifically blessed week.

Here are more resources for you: 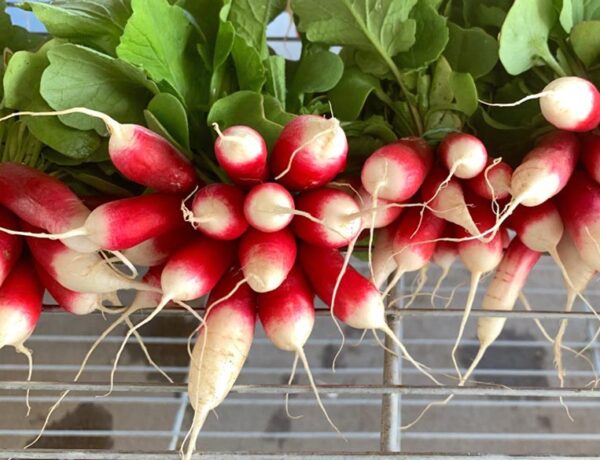 Easy vegetables, herbs, and flowers to grow in cool climates 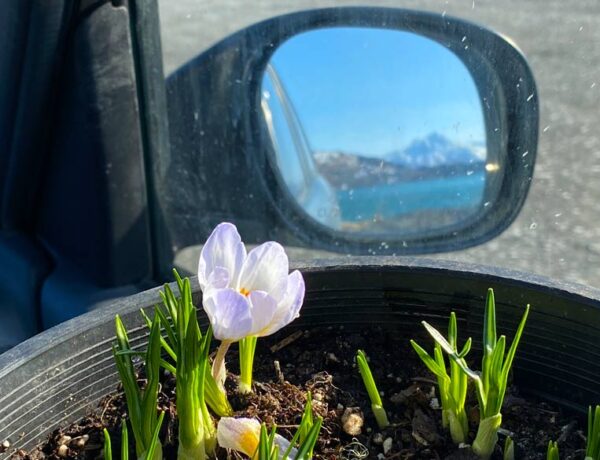 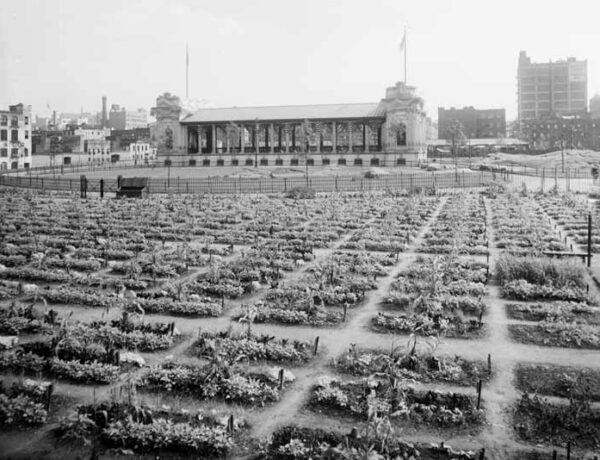 When Michelle Obama dug up the White House lawn